Travel Notes: Inspired by the strength of girls

or it’s only because I’m a girl.

These feelings make me better.

They make me ready.

They make me present.

They make me strong.

I am an emotional creature.

I recently had the amazing opportunity to volunteer at Ocean Academy High School on the island of Caye Caulker, Belize, during the month of March.  Among other things, I was lucky enough to be involved with the Female Leadership Club (FLC) at the school, which had meetings every Friday afternoon after school was over. 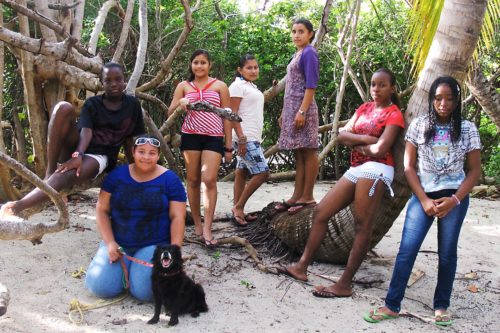 
Seven girls would gather in one of the classrooms, furnished with beat-up old desks and decorated with the artwork of the students, to share stories about their week and discuss a topic chosen by them. The mood was often serious as the girls shared about the issues they were facing in their lives, but would often quickly shift to playful as they cracked jokes and teased each other.

During my time on the island, the topic the girls had chosen was love. Using poems and stories, the facilitator would open up discussion amongst the girls about what love meant to them, and what healthy love was.

Each girl had a different view of love, but they were in agreement about two things. Firstly, they had all been told at some point that what they felt was not love because they were either too young or not experienced enough in matters of the heart to be able to know for sure. Yet somehow, they could all say when they knew that they loved someone, how they could tell if someone loved them, and could describe exactly what a broken heart felt like.

The facilitator did a fantastic job of reminding the girls that no one could tell them that what they felt was not legitimate, not only about love but about everything in their lives. She and the girls were also vigilant about making FLC a safe place for everyone to share their experiences, addressing anything that came up as a potential threat to the dynamics within the group. I was really impressed by how open and direct the girls were with each other, and hope that this is something I can help support in our Girl Power camps this summer at the Women’s Centre.

I want to close off with something the group did several times to start an FLC meeting. The girls all had a piece of paper and a pen, and wrote “I AM” statements about how they felt at that exact moment in time.

So, using myself as an example…

I AM so lucky to have been able to work with this amazing group.

I AM excited to bring back what I have learned to Girl Power Camp this summer.

I AM inspired by the strength of girls.

See you all in June!

Sarah, is a Women’s Centre staff member and Girl Power Coordinator who is currently backpacking through Central America.