1. Tell us a bit about yourself

I was born in 1991 in Zacatecas, Mexico. I recently obtained my MFA from the University of Calgary. Even though my degree is in sculpture, I also like to explore different disciplines and materials, such as drawing, printmaking, embroidery, and textiles. I obtained my BFA degree from Instituto Allende in San Miguel de Allende, Guanajuato in Mexico.

2. How did you get started as an artist?

Since I was a child I always had an interest for the arts. I spent long periods of time drawing or trying to fabricate my own toys from objects laying around the house. My family, especially my mom and my great-aunt, supported me and soon after I started attending painting and drawing classes. But it was after I finished high school that I knew that art was my passion.

3. How did you get into art and why do you choose the mediums you use (fabric, sketches, sculpture, etc.)?

I decided to do my BFA after attending the pre-college program at ACAD back in 2010. At that time, I was deciding if I would try to apply to ACAD or a University in Mexico. I ended up in San Miguel de Allende, but it was a crucial experience that showed me that I wanted to study art.

Regarding my mediums, they are mainly tied to the concepts that I’m exploring. For example, in my latest body of work Novem, the installation addressed the aftermath of Femicide in Mexico. Femicide is the killing of women because of their gender, in which outrageous acts of violence are visible. The term “femicide” encompasses the imbalance of the gender power structures, and the corruption and neglect from the authorities surrounding these murders, manifesting in the thousands of women and girls being killed each year. This attitude of neglect deeply affects the grieving processes of the families of the victims, hindering their possibility of their overcoming the tragedy.

The disruption of grieving the processes is part of the aftermath of femicide, and I addressed it through textiles and materials rooted in my Mexican cultural background: unraveled rebozos crystallized with salt. Rebozos are rectangular shawls associated with gender roles and to death practices. Salt is a purifying element present on the altars dedicated to departed loved ones during the celebrations of the Day of the Dead. Its use is linked to the belief that salt prevents the souls of the deceased from being “corrupted” when they visit the realm of the living.

Through the process of crystallizations, these garments adopted a skeletal appearance. The constant dripping of water and salt slowly reduced these embodied entities to bones. As an allegory for the journey to Mictlán [1], these “bodies” endure the passage of time, leaving only mementos behind: bones and hair preserved in salt.

[1]The Aztec underworld. Mictlán or the place of the dead, was described as a damp and dark place where the bones of past generations are stored, and the souls wait for their yearly return to the realm of the living. The journey to Mictlán can be understood as a metaphor for decomposition, and consists of nine dreadful levels or regions, filled with terrible creatures and dangerous obstacles, such as raging rivers, clashing mountains, storms of knives, and icy winds. These regions not only pose challenges for the souls, the physical body is strained as well. 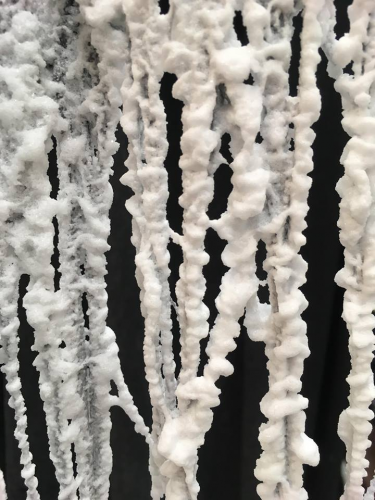 4. How do you feel about being a woman in the art scene in Calgary?

I’m still new in the Calgary art scene, since I only have two years in Canada. But comparing to San Miguel de Allende and Zacatecas (two cities known for their culture and art scene), I feel there are more opportunities for exhibiting my work, or to apply for grants and residencies, as well as more interest in artistic projects (even though the art community is struggling with the latest cuts in its funding).

5. What do you think we can do in the city to better support women in art?

I’ve always believed that art, beyond being a way to express oneself, is also a form to incentivize dialogue between people and communities. For women artists I think residencies and exhibition opportunities are a great way to support them, and for the community in general. I consider that taking art practices to marginalized communities can help expand horizons and encourage understanding among individuals.

6. What are you most excited about for your residency here at the Women’s Centre?

Being able to participate in community projects, which is where my current body of work is guiding me to. As well as to connect with people who may have similar approaches or interests.

7. Who is, or was, an influential woman in your life?

From my family environment, I must say my mom and great aunt, because thanks to them I am the person that I am now. But I also admire Colombian artist Doris Salcedo, because she approaches social matters that involve violence and turns them into inspiring and moving pieces.

8. What does feminism mean to you?

For me it represents a social movement that seeks equality, not only between genders but for minorities and marginalized communities as well. I come from an environment where misogyny is prevalent and widespread, to the point of being in a crisis of violence against women. For this reason, I consider this to be a matter that not only concerns women, but everybody.

1 thought on “Meet Claudia, Our New Artist in Residence”