International Women’s Day is a global event that celebrates women’s achievements and calls for greater equality. While progress has been made, women worldwide are still fighting to receive equal wages for equal work, working to end violence against women, and striving for equal representation in politics and media.

This year, the Women’s Centre has teamed up with the Alberta Network of Immigrant Women, Canadian Union of Public Employees, Calgary and District Labour Council, Public Service Alliance of Canada, United Food and Commercial Workers, and United Nurses of Alberta to offer a free community potluck on Thursday, March 5 from 5:30-8pm at the Kerby Centre (1135 7 Ave. SW). The event is open to everyone and will feature great entertainment and inspiring speakers.

Brenda Crompton, from the Brenda Strafford Society for the Prevention of Domestic Violence, will speak about courage, overcoming violence, and how our past does not define our future. Carla Olive will share her musical talents for the evening; you may remember her from last year’s IWD potluck and our Stampede Lunch. And last but not least, we’ll be treated to a rousing performance from Calgary’s own Raging Grannies. 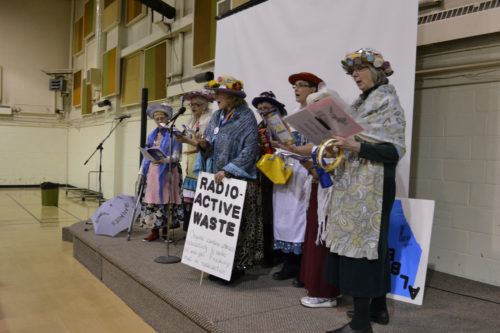 The Women’s Centre is also partnering with other local agencies to host events around the city on March 8.

International Women’s Day is an important celebration for us because it recognizes and honors the diverse populations that we work with every day. While all women face political and social barriers, immigrant women and women of colour encounter even more. Embracing diversity and learning from women with different cultural backgrounds is a key practice at the Women’s Centre.

The theme for this year’s International Women’s Day is Make It Happen. What does that mean at the Women’s Centre? To us, ‘making it happen’ means working toward greater equality, creating a safe space to connect with others, and assisting women to address their basic needs. Join us in making it happen at our annual potluck on Thursday, March 5.