On January 11, 2012 Mayor Nenshi announced the members of the leadership committee that will be responsible for Calgary’s Poverty Reduction initiative – an announcement the Women’s Centre has been eagerly awaiting.

For the past year, the Women’s Centre Social Issues Committee has been hard at work on a municipal poverty reduction strategy with a gendered lens. A backgrounder and letter were created and sent to Mayor Nenshi and Calgary’s 14 City Councillors. The backgrounder contains seven key points that were identified as essential components to a municipal poverty reduction plan that would address the unique needs of women in poverty.

The Committee followed up with meetings with City Councillors to further discuss these seven key points. Additionally, they specifically asked that any committee created to make decisions about a municipal poverty reduction strategy be comprised of 50% women and contain a fair representation of Calgary’s cultural and economic diversity.

You can read Nenshi’s blog about the leadership announcement here: http://blog.calgarymayor.ca/2012/01/calgary-poverty-reduction-initiative.html. 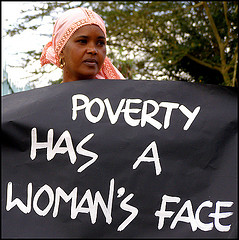 For additional information please check out our fast facts posted on the “Get Involved” section of the website or send me an e-mail at leah@womenscentrecalgary.org.