An update from the Social Issues Committee

Are you interested in learning more about how the Women’s Centre works for change? Find out what the Social Issues Committee has been up to and how they are working to represent the diverse needs of women in Calgary.

What does the Social Issues Committee do?

The Women’s Centre’s Social Issues Committee is a group of dedicated volunteers and community members who work on women’s issues and giving women a voice on policy and social issues.

One of the Committee’s main goals is to ensure the inclusion of a gender lens on poverty reduction policies. This year the Committee was involved in providing input on the City of Calgary’s Poverty Reduction Initiative. Social Issues Committee members also hosted the Women’s Centre’s “Community-Led Discussion” project to provide feedback for the Provincial Poverty Reduction Strategy. Recurring themes that were stressed by attendees included the need for increased income, and increased access to both affordable childcare and housing.

The Social Issues Committee also participates in and attends a number of community events in Calgary that work to address issues impacting the lives of women. Within the past year, the Committee participated in Make One Change: A Women’s Gathering and International Woman’s Day celebrations, as well as attended the Take Back the Night March, the Sisters in Spirit March and the Valentine’s Day Women’s Memorial March.

What is the Social Issues Committee currently working on?

As a result of the policy change recommendations that came out of the Make One Change women’s gathering, as well as consideration for work being done by partner agencies and grassroots groups, one of the Committee’s first initiatives is to work on a recommendation regarding amending the Alberta income tax act to replace it with a progressive tax system.

The Committee began researching income taxes in Alberta and across Canada. Some of the findings that have come out of our work on this initiative so far:

Check out the flat tax infographic created by members of the Social Issues Committee below (click to enlarge). 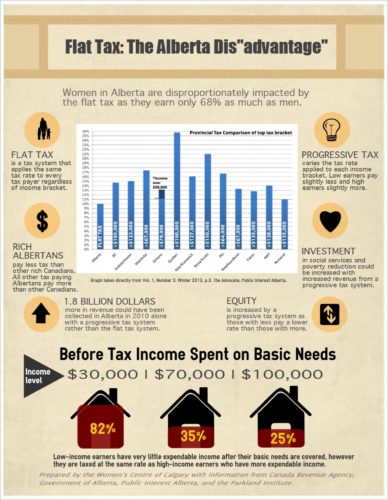 For more information, or to find out how you can get involved, please contact Leah, Leah@womenscentrecalgary.org.