A Tribute to Our Sisters in Spirit

Did you know Alberta has the second highest number of Missing and Murdered Indigenous women in Canada?

A tribute to our Sisters in Spirit

Taking time to learn about the Sisters in Spirit initiative, the Missing and Murdered Indigenous Women and Girls (MMIWG) final report and Calls for Justice, and having an understanding of the colonial history that led to violence against Indigenous women and girls in Canada is important when you are thinking about honouring, or creating a tribute to our sisters in spirit.

In the MMIWG Final Report Calls to Justice which can be viewed here, the calls to justice call for all Canadians to decolonize by learning the true history of Canada and Indigenous history in your local area, develop knowledge and read the final report, listen to the truths shared, and use more of what you have learned to become a stronger ally. Confront and speak out against racism, sexism, ignorance, homophobia, and transphobia, and teach others to do the same. Protect, support and promote the safety of women and girls. Take time to build relationships with Indigenous peoples and to understand Indigenous communities, their spirituality and beliefs, and lastly, hold the government accountable to act on the Calls for Justice. 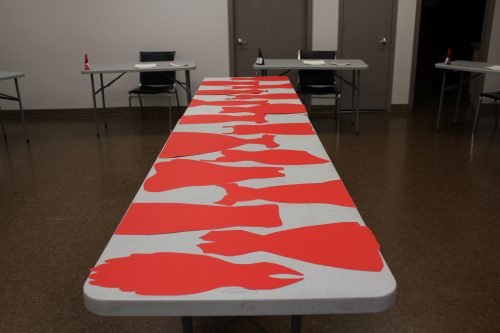 Although it seems like a huge task and can feel overwhelming, there is a wealth of knowledge out there to access. A lot of organizations and Indigenous people are raising awareness and are willing to help you on your journey. There are plenty of resources online: the local Calgary library has an Indigenous Languages Resource Centre, the Women’s Centre hosts reconciliation events and training, the University of Alberta has an Indigenous Canada course that is offered free online to all Canadians. The Women’s Centre also has an Indigenous History and Resources padlet that anyone can access, it’s filled with resources including links to the MMIWG final report. 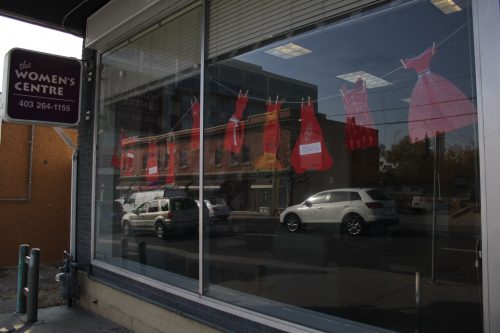 The tribute hosted at the Women’s Centre on October 1 for Sisters in Spirit was led by artist in residence, Julia Rose Sutherland, was meant to honour our sisters in Calgary, Alberta and the rest of Canada that have gone missing or murdered. The participants started by learning about MMIWG and Sisters in Spirit, Julia read parts of her thesis that focused on MMIWG and violence against indigenous women. After some time to learn, reflect and ask questions, the group started working on their red dress tributes. Red dresses are used to honour the missing and murdered Indigenous women and girls, hanging a red dress from your window, or outside your home symbolizes your support for MMIWG and also raises awareness to the movement. After participants made their tributes, the red dresses were displayed in the front windows of the Women’s Centre, in order to honour our Sisters in Spirit.